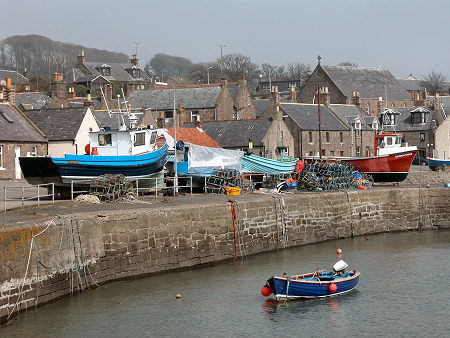 If you are relatively new to the Johnshaven area or considering moving to Johnshaven, then you are likely to be undertaking some research into the area. But what about the history of Johnshaven?

In today’s blog, we share 8 historical facts about Johnshaven to help you connect with the amazing history of this quaint local coastal village in Aberdeenshire and introduce Brotherton Estates who continue to make a pivotal impact on the area.

#1 The Origins of Johnshaven’s name is Unknown

While there seems to be no historical references to record who Johnshaven was named for, references to the village can be traced back to early dates.

An article by Undiscovered Scotland states that “In 1722 it was said to be amongst the most important fishing towns in Scotland”. This strong like to it’s fishing past is still notable today with fishing and related activities are still very much at the heart of the town.

In 1882-4, Frances Groome’s Ordnance Gazetteer of Scotland described Johnshaven like this:

‘Johnshaven, a fishing village in Benholm parish, Kincardineshire, with a station on the Bervie branch of the North British, 4¼ miles SSW of Bervie and 9¼ NNE of Montrose.

Standing upon a rocky reach of coast, it has a post office under Fordoun, with a money order, savings’ bank, and telegraph departments, 3 insurance agencies, 3 inns, 3 friendly societies, coastguard and police stations, 59 fishing boats and 120 fisher men and boys, a brewery, a sailcloth factory, a Free church, and a U.P church. A public school, enlarged in 1877, with accommodation for 282 children, had (1881) an average attendance of 207, and a grant of £171, 14s.

Brotherton Castle, now home to Lathallan School, was owned by Charles Alexander a parent of one of the pupils.

Following a fire at the school located next to Lathallan Farm just south of the hamlet of Largoward in Fife. the school with 74 boys, moved to Brotherton Castle.

The school’s website shares more of their history following the sale of the castle and it’s grounds to the school governors in 1950:

#4 Wairds Park, was Gifted to the Village in 1923 by Miss Anna Scott of Brotherton Estates

When the land was originally gifted to the Parish of Benholm and Johnshaven, a group of “15 volunteers from the local community; were charged with, among other things, promoting the well-being of the residents of the parish by providing a meeting place and facilities for recreation and to foster a community spirit.” (Source: www.johnshaven.com) https://www.visitscotland.com/info/accommodation/wairds-park-caravan-site-p215811

#5 The ‘Sea Pie’, was Born in Johnshaven

Sea Pie is a traditional dish found in many east coast fishing villages. While the recipe varies from fishing community to fishing community, it would have been made to feed the crews of fishing boats that came into the harbour.

The main ingredients consist of cubed steak/mince, potatoes and onions. You can make your own Betsy Souter Sea Pie using the recipe HERE.

#6 Home to One of the First Junior Football Teams

While Johnshaven Athletic AFC weren’t founded until 2000, Brotherton Rangers, who played at Johnshaven, are said to be one of the first junior football teams in Scotland.

“They were known in their early years as the ’Jeely Jar Rangers’ as they collected jelly jars at one penny a time to raise the funding for their first team strip. In 1897, there was a disruption at the club. Several players and officials broke away and formed Johnshaven Dauntless.

The Rangers went defunct a few years later, but Dauntless have carried on since, breaking only for two world wars. The club now plays in the Fettercairn & District Summer AFL.”

While Lathallan Preparatory School has occupied Brotherton Castle, the family seat of the Scotts of Brotherton, since 1950, it was also turned into a maternity hospital during the Second World War.

Built in 1867 by Hercules James Scott, who had married Anna Moon, the daughter of a Liverpool cotton merchant. On Hercules Scott’s death in 1897 his eldest daughter, Anna Katherine (the last Scott to live at Brotherton Castle) succeeded to the estate.

The Castle’s history is scattered with stories of local gatherings and open access pre it’s handover to the school too. Along with their staff annual Christmas party, the gardens were opened up to the public every year. Picnics were held by various Sunday Schools on Laundry Park with the head gardener leading each group up to the castle at the end of the day for a tour and meet and greet with Miss Scott.

“The estate had its own gas-works, as well as five gardeners, five foresters and three gamekeepers who kept the grounds in order. Inside the Castle there was a housekeeper, butler, footman, hall boy, cook, kitchen maids and scullery maids. There was also the Castle’s own laundry employing two maids. With the advent of the car two chauffeurs were employed, and in North Lodge, the house at the top of the main driveway, there lived a gatekeeper.” (Source: https://lathallan.org.uk)

70 Stylish New Homes Perfect For Families And Those Looking To Downsize.

We are currently going through the final stages of planning at the moment for an exciting new development in Johnshaven.

#8 The First Annual Fish Festival was Held in 1996

While the annual fish festival is a much newer edition to the Johnshaven event calender, celebrating it’s 23rd year in 2019, it attracts locals and visitors from across the world.

With historical fishing vessels on display, raft race, water walkers, live entertainment and much more, the festival celebrates the village’s famous shellfish and its prominence in the maritime industry.

Two family businesses with heritages firmly in the local area have come together to create a stylish new housing development in Johnshaven – The Beaches.

As explained above the The Alexanders have owned Brotherton Estate since 1949, shortly after which Brotherton Castle was changed into Lathallan school for boys.

The present owners, the Alexander family have been involved with many committees over the years and are at present working with Benholm Mill.

Brotherton Estates & Fotheringham Homes endeavour to employ and source suppliers as local as possible, realising the positive impact they can have in their local community.

Continuing Anna Scott’s great work on highlighting the importance of wellbeing, a piece of ground has been gifted to the local folk so that they can grow their own flowers and vegetables. In addition open space has been prioritised in the planning of the 70 house development with several large areas outlined.

Do you have an interesting fact about Johnshaven or the local area? Or perhaps you have a connection with the history of Johnshaven that we’ve shared above? Or are you considering a move to Johnshaven?

Read More in our Related Blogs:

We’d love to hear your stories, so feel free to share in the comments below.